Why? We visited Hvar on our honeymoon. Also on this trip we went to Dubrovnik, Korkula, Split and Zagreb.

If you see photos of Hvar Town harbour it looks absolutely idyllic. The water is sparkly clear, so clean you can see the sea urchins hiding on the seabed. The town is made up of Venetian red roofs, golden walls, rooftop bars, pavement restaurants, shady, cool, hidden alleyways, castles perched on mountain tops, overlooking the town. It looks perfect. I didn’t like it.

Yes, Hvar Town is beautiful – but it knows it. I thought it was a gorgeous place but I also found it to be really pretentious and a little bit boring. Service was rubbish and unfriendly, everywhere was crowded and there wasn’t actually that much to do. It felt like a ‘cool’ place to be, the Ibiza of the Adriatic, with the rich, cool kids and prices to go alongside it.  I don’t want to sound snobby, but it wasn’t for me.

The main attraction seems to be the Pakleni Islands, just off shore. I’ve seen guides describing these as some of the most gorgeous islands in the world. But the island we went to was a scrubby, rocky, low-lying empty place with a few pine trees and stony seas. Apart from the crystal clear waters, I really couldn’t see the attraction.

Carpe Diem Bar has it’s own party island. You have to get a boat to the island, which is made up of bars, swimming pools, beaches etc. I love a good party – and the idea of a party island which you have to get a boat to sounds like the coolest thing in the world to me. However, it’s cool with a capital C. They had a ‘white night’ party while we were there and most of the people going to the clubs and bars seemed to be the frat boys and girls, summering in Europe. Not my cup of tea.

Maybe away from peak season and away from Hvar town we could have better appreciated this pretty place. Maybe if we had not been on honeymoon and were looking for the party, we might have had a better time. However, to me, on this trip, Hvar was just a pretty face/ pretty place – surrounded by other gorgeous places with more depth. I much preferred quiet Korkula, which was quietly charming. 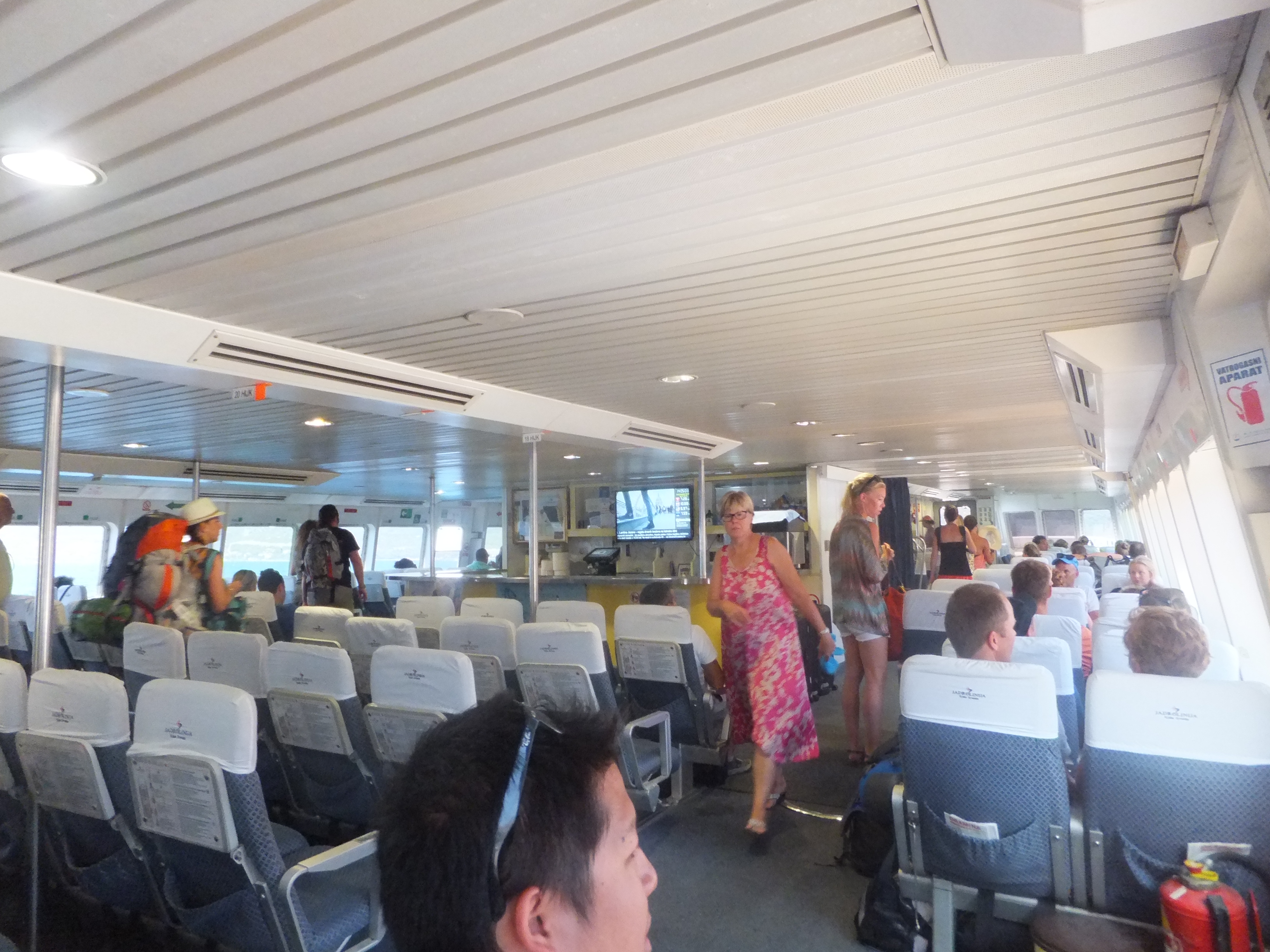 We travelled to Hvar from Korcula island. We caught the Jodrolina hydrofoil ferry, which runs up and down the coast, from Dubrovnik to Split, during the summer months.

The journey from Korcula to Hvar took about an hour, the boat had seats for everyone and a small cafe (see photo above). It was a good, efficient service.

Later on we caught the same ferry service to get from Hvar to Split. More information about this can be found on the Split page.

We pre-bought our tickets online for both trips, and I’m glad we did as the service was busy – especially the departing boat. We saw a lot of morning-after-party-people trying to buy tickets at departure, but the boat was fully booked, and as there was a really limited service, this meant they had to stay an extra day or two on the island.

If you can’t pre-book your tickets online, the shop to buy tickets is on the harbour side in Hvar.

A really cool way to get from Hvar to Split is to take the float plane, which we were very tempted by and which is not too expensive. European coastal airlines (ECA) fly from Jelsa to their seaport at Resnik, and provide shuttle services at each end to transport people to downtown or to the resorts. The total journey time is about the same as the boat, but getting a float plane would be so much cooler and apparently you get amazing views. Prices start from €35 (about £30).

ECA also fly the float planes from Split to Pula and Rijeka in the north, which would be an amazing way to see this gorgeous coast. They even fly to Ancona in Italy. If we go back to Croatia, we are going to use these to get around as they’re not too pricey and they’re float planes!

What we did on our holiday

Not a lot to be honest. We were only on Hvar for a day or two and there’s not loads to do on the island; It’s just a pretty place to be.

The town is built around the harbour and St Stephen’s Square, the town square which is the largest in Croatia (see above). At the far end of the square is The Cathedral of St Stephen. It has a very elaborate bell tower.

On the main square is The Arsenal, which contains an art gallery and an old theatre.

What I particularly liked about Hvar Town were the lovely food shops and restaurants, often hidden down shaded alleyways. I particularly remember the amazing bakeries. I also loved sitting on the harbour side, watching the world and the boats go by. 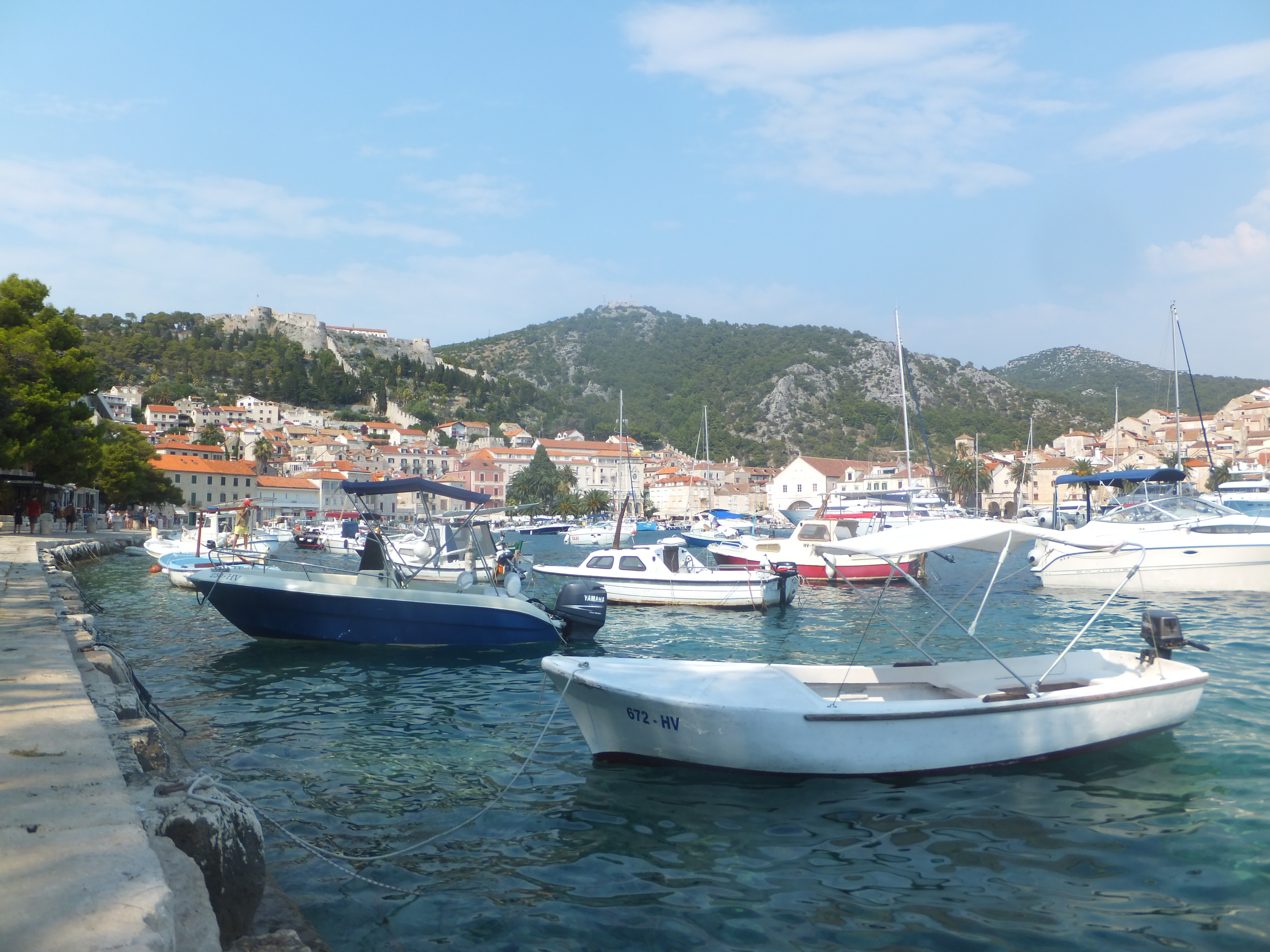 Sitting on the mountain side, overlooking everyone below, is Španjola Fortress. We didn’t walk up to this as we were being lazy, but it looks like an easy walk to get to the fortress, it has cannons and apparently the views are amazing! You can see out over the Pakleni Islands. The fort was built by the Venetians in the 1600s. That is all. 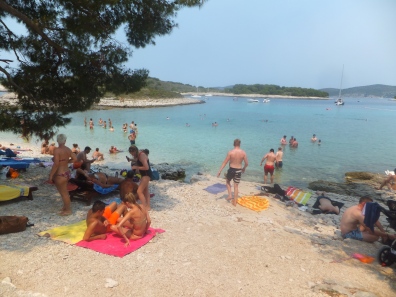 The Pakleni Islands sit just off the coast of Hvar, protecting Hvar harbour from the open sea.

We took a day trip to St Clement’s Island, one of the Pakleni islands, and though it was pretty – it wasn’t that special.

To get to the island we caught a water-taxi from Hvar harbour. We just saw a boat offering the trip and got on. We didn’t pre-book the trip, you just turn up and jump on a boat that is going over, though we had scouted out the departure times the day before.

The island was rocky and scrubby, with a few pine trees. It was pretty busy, with people sunbathing on any clear space. The bay we went to had clear water, but it was steep and rocky and there were quite a few sea urchins, so we had to be careful. The island that we visited had a cafe, which wasn’t too pricey, and we had a nice afternoon pootling around the bay and sun-bathing. We had a relaxing afternoon here.

One of the Pakleni Islands is a party island, with just a nightclub on it. Carpe Diem is an extremely trendy nightclub which has beaches, swimming pools, terraces, open air bars, beach bars, big name DJs etc. I think I would love it, if it wasn’t so ‘cool’. When we were there they had a ‘white party’ and they were ferrying people over, all dressed in white, to go be beautiful in this idyllic place. Maybe I sound judgmental, but it just all seemed really pretentious to me.

Free taxi boats run from Carpe Diem Bar, on the harbour side, across to the island.

If I was touring around Europe with a big bunch of mates then I would totally go here and I would probably love it. It wasn’t right for us on our honeymoon though and it wasn’t quite our cup of tea.

If you’d like to explore Hvar Island you could hire a car and go for a pootle about, looking at lavender, the main export of the island, and vineyards. Apparently it is quite nice for cycling too, as the roads are so quiet – though much of the island is inaccessible.

Beach wise, like much of the Croatian coast, there are no real beaches – people bathe off the rocks and on the harbour front. The water is sparkly clear though and so inviting, especially on a hot afternoon. Time Out has a guide to the island’s beaches.

And that’s it. Although Hvar is very pretty – there really isn’t a lot to do here. Normally I would have a ‘what we missed’ section, but I don’t think we did miss anything, apart from the fortress.

Although this was our honeymoon, we didn’t have loads of cash to spare – and so we didn’t spend so much on our accommodation in Hvar. I think this might have been a mistake as we were on our honeymoon and this apartment was fine, but not special, like we’d hoped it would be.

The Sunny Elza apartments sit up on a hillside overlooking one of the bays in Hvar town. Our apartment was at the back though, so we overlooked the next-door-neighbour’s back garden – and they overlooked us – so we didn’t feel very comfortable relaxing on the balcony and the apartment was a little dark.

The apartment was fine. It was a studio apartment. It had a kitchen, dining table, bed and small bathroom.

The family who ran the place were friendly, but very busy – so we didn’t really see them at all, apart from when we checked in.

We paid €255 for three nights (€85) and for that price, I think we could have got somewhere a little nicer and a bit more special.

Had we had a room with a view, I think we would have enjoyed our stay here much more – as it was, I felt like we were in a little bit of a dark hole. Our fault – we should have booked more carefully.

The apartments don’t have a web-page but they do have a Faceboook page and you can book them through booking.com.

Where we ate and drank

Eating and drinking in Hvar is good! Foodwise, there are a lot of good restaurants and bars here, though we found the service to be atrocious! This wasn’t just a Hvar thing – this was a Croatian thing. We’d often be ignored for hours, waiting to order or pay. Once we were sat with some girls who got so fed up of waiting – they seriously had been waiting for an hour – that they decided to just walk off. We were tempted to do this too.

There’s lots of cafes and bars located on the harbour front; many with sound-systems; places to while away an afternoon with a few cocktails and a good book.

The two places listed below all had nice staff, which is one of the reasons I am recommending them.

The Burger and Champagne Bar

Set in a rooftop, overlooking downtown Hvar Town, The Burger and Champagne Bar serves great burgers and champagne! It was perfect for us on our honeyroom: romantic setting, champagne and fat-ass, delicious, cheese drippy burgers with quadruple cooked chips. Yum. They enticed us in with interesting free shots; they kept us there with their fun menu, great location and cheap champagne.

Sadly for you guys,  I can’t find any information about this Hvar branch now, which suggests it has closed. However, they do appear to have a branch in Zagreb.

There’s a cluster of sea-food restaurants located in a back-alley, just up from the harbour in the centre of town. We went to Dalmatino’s where we had the fish platter, which was delicious! It was so lovely that we went there twice. The service was friendly and prices weren’t too high.

Please note, some, if not much of this information may not be correct, or may be out of date. All these articles show is how we found these places when we visited and what we personally thought of each place. Where possible I will include links to site which will contain more up-to-date info. All of this is our own work and any opinion expressed is that of the author only.

All photos copyright of J Clemo-Halpenny, unless otherwise stated. If you would like to copy or reproduce any of these images, please email me to ask permission.